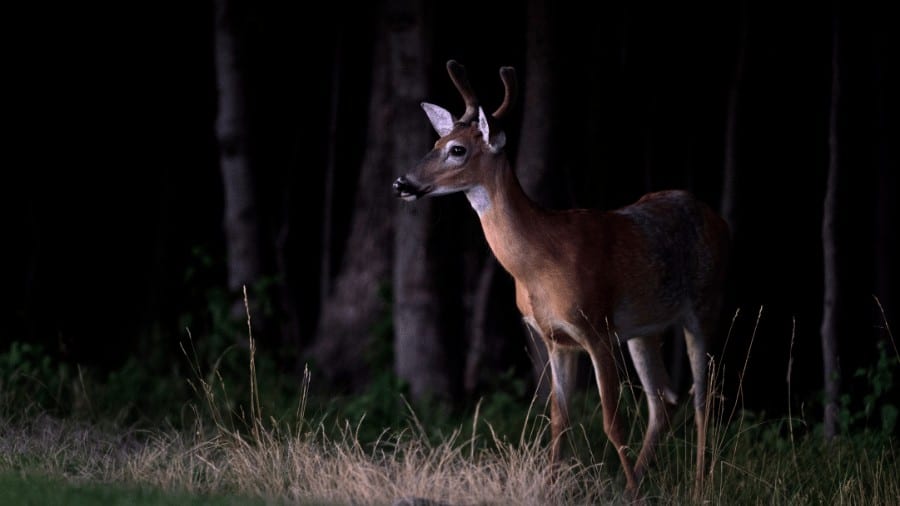 Trail cameras are the devices of choice when it comes to discretely watch or hunting animals especially deer. Their flashes are Infra-red (IR) LED or white lights which help illuminate images and videos. But the big question is: Can deer see trail camera flash?

Yes, deer can see trail camera flash! They have a reflective layer in their eyes called Tapetum Lucidum. It makes their eyes shine in the dark and also reflects light back to their eye rods and cones enabling them to see Infra-red and ultra-violet light such as those emitted by trail cameras.

A study conducted by Warnell School of Forestry and Natural Resources of the University of Georgia’s agrees that deer can see clearly in low light. In the rest of this article, we will provide you with more interesting information about deer eyes and trail camera flashes. Here we go!

The concept of color is determined by the perception of the different wavelengths and frequencies that make up the color spectrum. Red is the color with the longest wavelength in the spectrum while violet has the shortest.

According to the University of Georgia research, deer can see colors that lean towards the violet end of a color spectrum which means that they can see blue colors and ultra-violet (UV) light. The eyes of mammals contain two types of cells that enable them to see light. These cells are called the rods and cones. Rods allow mammals to see in low light but do not allow them to see colors. Cones, on the other hand, pick up colors during the day.

The eyes of human beings contain more cones so we can clearly see and distinguish colors. However, due to the limited number of rods, we can’t see clearly in the dark. Deer eyes have more rods than cones so they can see and move easily in the dark. Trail camera lights have short wavelengths so they can be detected by deer even though humans can’t see them. So, whether white flash or infra-red light, deer can see them!

Yes, the white flashes of trail cameras could scare deer and make them scamper away! However, we must state that the watchword here is ‘could’. We use this word because there are different variables that come into play here.

Firstly, we are certain that with respect to the behavior of animals, different species; and even animals of the same species, have their individual personalities. Like humans, deer are believed to have different memories and different fears and could act differently under different circumstances and situations. So, the fact that one doe loiters around your camera without any care doesn’t mean that another won’t scamper away on detecting the flashes. A deer that has had some scary experience around your house; maybe when it was almost shot will certainly be wary and will thread with caution, ready to scamper away to safety at the least provocation.

Also worthy of mention is the intensity of the white flash emitted by the particular trail camera. Different trail cameras have white flashes that have different intensities just as infra-red ones have the ‘no glow’, the ‘red glow’, and the ‘low glow’. So if one camera doesn’t scare deer, it doesn’t mean that another would not. In fact, it is this possibility of easily scaring deer (and more likely detection by humans) that has made white flash trail cameras less popular than the infra-red types.

Looking at it from another angle, we can say that white flash may not scare some deer since they resemble tiny flashes of lightening which the deer must have become used to. So, again, it is not fixed on stone. However, the positioning of the camera will play a significant role in this situation. If it is placed high up a tree, then the deer may not be ruffled but if it is placed much lower, then there’s a higher possibility that it will understand that something is out of place and become spooked.

Researchers agree that typical of other crepuscular prey species, deer see better in dim light. In fact, Bradley Cohen who led the University of Georgia research team refers to them as anti-predation machines; thanks to their near-perfect vision in conditions that humans won’t see a thing.

Like we said earlier, deer eyes are particularly sensitive to short-wavelength colors leaning towards the violet end of the spectrum such as blue. This is why deer see best by the bluish dusk and dawn and of course, that’s when they are also most active. Researchers agree that they can distinguish blue colors from red but cannot distinguish green from red or even orange from red. Infra-red lights have shorter wavelengths and even though we can’t see them, scientists believe that deer can, due to the nature of their eyes.

We have also considered their visual acuity which is quite different from that of humans put on 20/20. The earlier-referenced University of Georgia research put the acuity of deer eyes at 20/100. Their pupils are horizontally-shaped and are 3 times larger than the round human pupils. These pupils make their eyes capable of allowing 9 times more light than human eyes.

Another reason why we are convinced that deer and most other animals may be able to see IR light is the report by some deer watchers and hunters that they have been caught time and time again staring at the camera lens as if posing for a perfect shot! Their interest may have been drawn by the clicking of the shutters but we know that something must have attracted their eyes to the exact position of the lens in the first place.

What is the difference between the low glow and no glow IR trail cameras?

Modern trail cameras use infra-red (IR) lights to illuminate pictures and videos of targets. These IR lights are believed to be visible to some animals including deer. Since deer can see them, they will certainly scamper to safety at the least flash and that would ruin the intention of the photographer. This is why manufacturers have tried to minimize this possibility by developing Low Glow and No Glow trail cameras. So, what’s the difference between them?

Low Glow IR Trail Cameras: These cameras have standard LEDs or white LEDs. Their LEDs use the 850 nanometers (nm) light spectrum which is invisible to humans and most animals. Low Glow cameras are usually about 30% brighter than their No Glow counterpart which is why some manufacturers prefer them. Their flash range is also greater since their wavelengths are longer.

They usually don’t have any covering and their LEDs emit a slightly red glow when triggered. Their red glow has been reported to spook sensitive animals (especially deer and foxes). They are also preferred by some photographers since they are cheaper because they use a lesser number of LEDs. They also operate at a faster shutter speed on photo mode which makes them capable of producing better images of the target. Some of the best brands come with a filter that removes a part of the red glow. Some others have a coating on the LED in combination with the filter.

No Glow IR Trail Cameras: These cameras have black LEDs. Manufacturers refer to them as Black Flash or Covert IR. Their LEDs use the 940 nm light spectrum which means that are more invisible than the Low Glow options. However, their flash range is 30% less than the Low Glow options and manufacturers try to compensate for this by including features that boost video exposures artificially thereby minimizing loss of definition. Their shutter speeds are also lower for night photos which makes them not really effective for capturing moving animals since the images may be blurred. They are the better option of the two for security use and for recording sensitive wildlife.

Since we have shown you reasons why we believe deer can see IR trail camera flash, we have provided a solution that will make sure that you get the best experience while trying to photograph or video them, simply by minimizing whatever glow they may be able to see:

Get a strip of duct paper (gray). It should be a bit longer than the IR LED panel in front of your camera. Place it directly over the panel and apply slight pressure with your fingers. Place a second identical piece on the same spot to prevent any glow from being emitted.

Cut out a square shape from the IR blocking filter also called the cutoff filter. It should be a bit larger than the IR panel. Use strips of duct or masking tape to tape the cutout filter to the panel. The IR will no longer be visible.

Different types and specifications of trail cameras are available in stores worldwide. The best brands which feature rugged designs and optimum functionality are available on Amazon.com