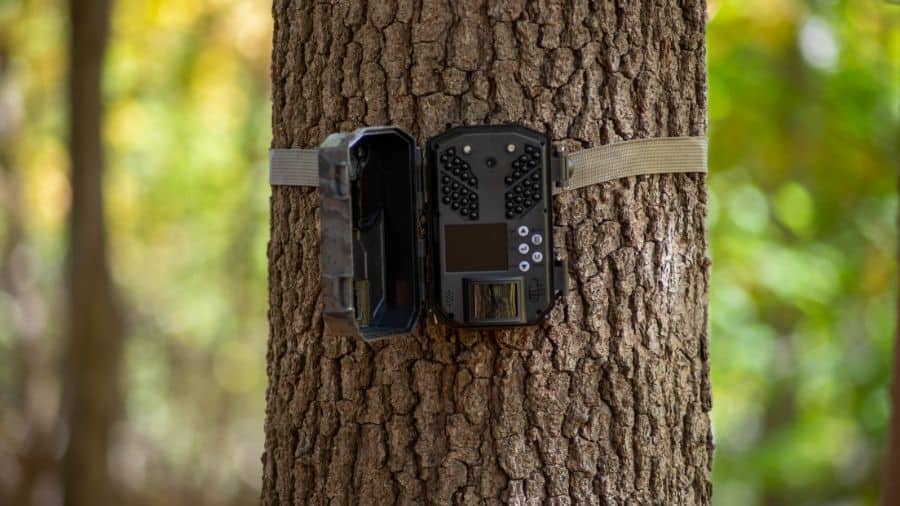 Trail cameras are a great way to get an idea of the animal activity in an area. By understanding what triggers a trail camera, you can place it in the best spot for results and keep track of animal movement.

Things that will trigger your trail camera

You can even capture pictures of animals to put on your wall! Here is a list of common triggers for trail cameras:

The most common trigger for a trail camera is an animal’s body heat. Most wildlife have warm bodies, so they will be the primary focus in your photos. The flash emitted from a trail camera will alert nearby animals that there are humans nearby, which may cause them to leave the area entirely.

This can lead to under-representation of certain species in your data set. However, this type of trigger also ensures that you only get presence data rather than abundance data because any given photo could include more than one individual.

For example, a deer may be the only animal in a particular area, but a photo of it on a trail camera will indicate abundant wildlife in an area.

An object being moved

When an animal walks past the trigger zone of a trail camera or passes directly over it, an image is taken. Any objects that are moved as well as animals will set off this type of trigger. This can include trees swaying as well as animals as small as bugs and mice. By using this type of trigger, you have to take into account that all images captured could also include just branches or just grass swaying from wind instead of actual wildlife.

A heat signature and an object moving

This type of trail camera is by both movement (heat trails of animals) and objects being moved. This allows you to get presence data on animals while also ensuring that all images captured will be of actual wildlife.

For example, a deer may have walked past the camera on consecutive nights so pictures of it would indicate an abundant population in an area–even if only two individuals were present throughout the week or month snowfall/rainfall accumulations can also be detected by trail cameras.

A trail camera that takes pictures during the day is useful for determining species presence within an area. If you are trying to get photos of specific animals, then using a near-infrared flash will allow you to get quality pictures of them in daylight.

Depending on the type of trail camera, it may be able to take time-lapse videos instead of still images. This means that instead of taking one image per trigger, the camera takes many over a given period of time (a few seconds up to several minutes).

A sample size can then be taken from these photos and analyzed with statistical software or GIS software available at your school library. This type of triggering can be useful for studying animal behavior.

A trail camera that takes time-lapse video will sometimes have a feature to include the date and time in each picture or on your computer when you are viewing it. This is very helpful with determining what species are in an area over extended periods of time.

Trail cameras that have GPS receiving capabilities can determine exactly where something was when the image was taken, then store that information on your computer along with the photo itself.

Using this data is particularly helpful if you are trying to track nocturnal animals, because their heat trails won’t show up in images but they will appear on a map showing exactly when they were in one place or another.

Types of animals that trigger a trail camera

If you are trying to determine the animal population in a specific area, it’s important to know what types of animals can trigger most trail cameras.

The following is a list of some common wildlife that will activate most trail cameras:

Not all species will fit on all triggers due to their small size which makes detection more difficult. These small mammals may be detected as movement or as an object being moved instead.

Some examples include rocks being kicked over by small mammals and grass swaying as opposed to an actual animal.

Other things that may trigger your trail camera

Since the list above is not exhaustive, here are some other examples of what could be detected by a trail camera:

How to place a trail camera for the best results

The most important factors in deciding where to place a trail camera are accessibility and visibility. If you cannot access the area where the camera is located then there will be no point in checking on its findings. And if it’s not visible to animals, it won’t be able to record what walks by. As a general rule, you should consider the following when determining where to place your trail camera:

Setting up your camera on an existing game trail allows for easy animal access and visibility. This also minimizes human disturbance as well since people are less likely to enter into these areas due to the fact that they’re usually muddy/wet, overgrown with vegetation or swampy.

If possible, mount the camera perpendicular to the road (with signage visible) so that it can view both sides of the road at once–this way you will catch anything traveling in front of or behind your traffic sign without to move all your equipment.

If you are trying to monitor wildlife activity near roads, make sure cameras are not pointing directly down the road where people regularly travel.

This way, do not capture human images or images of someone who has stolen your camera if this is a concern.

Putting the camera on top of a dam will allow for great surveillance of both moving and still objects caught in the frame. Covering bodies of water can be very helpful when it comes to recording nocturnal animals since their heat trails won’t show up in images but they will appear on a map showing exactly when they were in one place or another.

Also, mount the camera so it faces towards an open area instead of straight down–this provides better visibility overall for any mammal crossing the area.

Be aware of your surroundings

When placing a trail camera, be mindful of where you are setting it up. For example, if you are in bear country make sure there is nothing around that might attract them to the area or cause them to act aggressively (e.g., trash, bird feeders). Remember that bears love salt and often raid roadways looking for dirt with high sodium content.

Some animals will not move far from their “home turf” so if they’ve come across something good before in one place, they will continue to go back there again and again. This is why knowing your target species’ behavior is important–you don’t want your camera to catch nothing but images of animals who never leave a small area.

Additionally, if you are setting up a trail camera in an area where there is a high risk of theft make sure it’s hidden well–trail cameras can be very expensive and people will steal them if they think the equipment is valuable.

Time of day to place a trail camera

In general, during the day time try not to have your camera pointing directly into the sun otherwise everything outside your field of view will end up being a bright white blur on your image.

It may be useful to mount the camera facing south or west because this means that you’ll catch things going by in front of or behind what is visible between 7am-7pm. Also, if possible check your equipment at dawn and dusk since many animals are more active during these times.

During the night time, it may be helpful to move your camera every once in awhile (e.g., 1 mile) so that you can see different areas–this way you will record animal movement throughout an area instead of just what is happening in one specific location.

Also, cover the lens with some type of shield (e.g., burlap, panty hose) to prevent light from reaching the device and alerting animals that they’re being watched–a blinking red light will scare animals away so keep this in mind when deciding where to position your equipment at night.

When choosing how long to set up a trail camera for

Cameras need to be checked regularly so make sure your equipment is durable and won’t break easily if it’s left outside for long periods without being checked.

Depending on how you plan to use your camera, check it once a week or set it up to take pictures every 15 minutes and then download the photos before heading off to work in the morning–this way you will get any activity that occurred while you were away from home during the day.

Trail cameras are a great way to get an idea of what types of animals are moving through an area. By understanding where and when certain animals are active, you can place your camera in the most advantageous spot for capturing footage of them.

Keep in mind that some species will only travel short distances while others may roam widely, so it’s important to move your camera around every once in awhile to get a good overview of animal activity in the area.