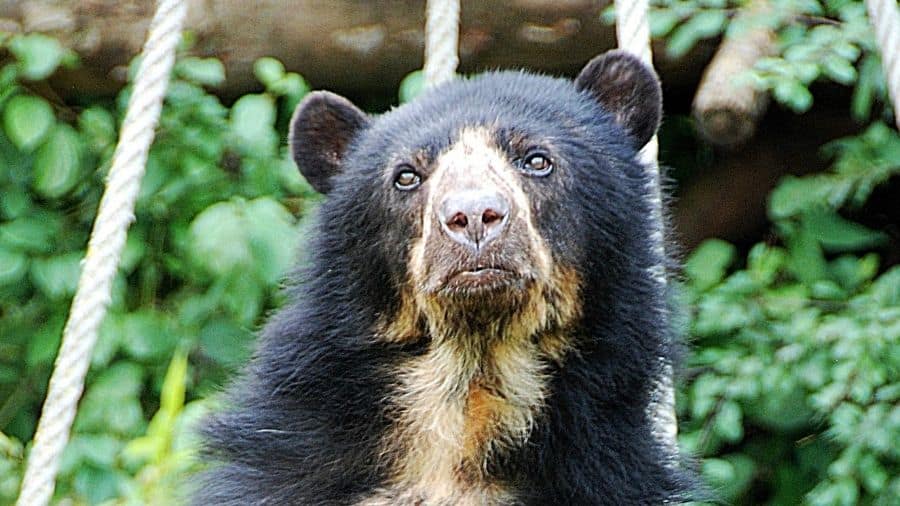 Bears are curious animals and may mess with trail cameras because they’re interested in what’s going on in the area or they may see the camera as a food source. The curious nature of bears can be a challenge for people who don’t understand why they’re messing with their trail camera.

Bears have been known to take food sources such as bait left out for deer or elk, but some will also take the camera itself or knock it over.

This can cause frustration for people who are using trail cameras to capture footage of wildlife, as it can interrupt their research or photo opportunities.

It’s easy to understand why bears may be curious about trail cameras, as they can provide a glimpse into the animals’ lives. Here is a reason why behind it. and What you need to know more about the nature of bears.

why do bears mess with trail cameras?

Bears are curious animals and will often mess with things that they don’t understand or that seem out of the ordinary to them. It’s not uncommon for bears to investigate cameras placed in the wild, as they’re naturally inquisitive creatures.

In most cases, bears will simply knock cameras over or swipe at them with their paws, but in some instances, they have been known to damage or destroy equipment. So if you’re using a trail camera in bear country, it’s important to take appropriate precautions to protect it from curious bruins.

First, never set a trail cam up where a bear can knock it over. For example, if the trail cam is facing a tree with branches on the side of the tree that faces your intended target area, you risk having a surprised bear run into your camera as they approach from behind. In areas with bears, you should always set up your trail cams near the top of posts or trees to avoid this from happening.

Second, some trail cameras have been found to attract bears due to their infrared flash strobes. If you’re using an IR-illuminated trail cam in bear country and notice that bears are more curious than usual around your equipment, consider switching to a different type of camera or disabling the strobe function on your units.

Third, in some states, it’s illegal to use a trail cam where bear hunting is allowed. In these areas, you have two options: Either stick with using your camera for capturing wildlife activity, or consider moving into an area that’s not used for bear hunting at the appropriate time of year.

Lastly, don’t set up a trail cam near a food source. As previously mentioned, bears are naturally inquisitive and may investigate cameras placed near food sources due to their scent being present on or around the equipment. If this happens and they learn how to damage a camera by investigating further, there is a chance they will come back looking to repeat the experience with other cameras.

What happens when a bear messes with a trail camera?

When it happens, It can have serious consequences for both the bear and the camera owner. For the bear, it could mean becoming conditioned to interact with cameras in a negative way, which could lead to them being more destructive towards cameras in the future.

This could also potentially impact their natural behavior as they learn to avoid areas where cameras are present.

For the camera owner, it could mean losing an expensive piece of equipment, or worse, having footage of bears damaged or destroyed. So it’s important to take steps to prevent bears from interacting with your trail cameras, such as those mentioned earlier.

The curious nature of bears

Bears are one of the most interesting animals in the world. They are incredibly curious and will investigate anything that seems out of the ordinary. This is why it’s so important to be careful when you’re hiking or camping in bear country, because they may see your food or camping gear as something strange and investigate it.

One of the most common ways that bears get into trouble is by getting into campers’ food. When people are on camping trips, they often leave some of their meat or other foods in storage containers outside while they sleep inside. Bears can smell this food from far away and will make a beeline for it when they find out what you’ve left out there.

Unfortunately, if they eat too much of your food or come to expect that all human campsites have free food available, they may become aggressive towards humans later on down the line. This is why it’s important to never store your food outside with no lid on it even if you’re just taking a short hike around the area; nothing should be stored in the open so there’s no chance of it being smelled by a hungry bear.

Your trail camera can be seen as something strange or unusual by bears, especially if they’ve never encountered one before. They are curious creatures and will try to inspect the camera for food.

This is why it’s important to make sure you take your camera down when you’re finished using it so that there’s no chance of any wildlife getting into trouble.

Remember, the best way to prevent these kinds of accidents with bears on your trail cameras is through education! Putting up more signs about feeding wild animals will teach people to be more careful about leaving out their food on camping trips or hikes. Most people don’t realize that these kinds of animal/people interactions are far more common than they think.

Bears and their food habits

Almost all animals in the world have evolved certain instincts that tell them what is or isn’t food. For example, birds will usually try to eat things that are colorful because most fruits and berries are brightly colored so they can be easily spotted by potential herbivores.

When it comes to bears, they are no different than any other animal in terms of their instinctual feeding habits. Bears like to eat plants and berries whenever possible, but when they need some meat (like when they’re raising cubs) then they’ll bully large mammals in the area until one of them gets hurt enough for the bear to eat it without having an active chase scene on their hands.

This is why you see raiding parties bears when there’s a smaller, more solitary bear in the area; they can band together and overpower a larger animal when it comes to acquiring food.

In fact, this is one of the reasons that bears raid campsites when there are people around: they know that people have meat with them because it’s impossible to live in the wild without needing some kind of protein source.

The best way to prevent your trail camera from being raided by bears looking for free food is to never store anything outside without a lid on it. Bears may be smarter than we give them credit for and if they find an open container with no food immediately visible inside, they’ll usually move down the line and look for something else.

Then again, if you’re using unsecured containers then it’s more than likely that they’ve tracked down your campsite already which means that it’s too late to prevent an encounter.

One of the big reasons that trail cameras are so important is because they help researchers better understand bear behaviors.

For example, one study found that bears can actually determine if a person has food stored outside their house without even seeing them inside! The bear will usually act like it’s not interested in the area until sundown when people are likely to be sleeping or at least inactive. Then, within 20 minutes of starting their nocturnal activities (or sometimes even faster than that), animals like this black bear will begin raiding campsites and searching through tents for anything to eat.

Researchers know this based off of different motion sensor data; the animal was able to detect humans moving around inside their home without them needing to make any noise whatsoever.

This is why it’s so important to bring your trail cameras down after you’ve finished using them. If the bear knows people are inside their home then there’s a chance that they’ll come back later at night when you’re sleeping or long after you’ve left the area entirely.

The best time for this sort of thing is during early spring when bears are hungry but aren’t hibernating yet; it gives them plenty of chances to try to take food from careless campers while also avoiding older, more dominant animals that might want to kill them if they catch wind of people in their territory.

Bears are intelligent animals that have learned how to take advantage of people who store their food improperly. They can smell food from long distances, and will often return to an area multiple times if they know there’s something good to eat available. The best way to prevent your trail camera from being raided is to never store anything outside without a lid on it.

If you’re using unsecured containers then it’s more than likely that they’ve tracked down your campsite already which means that it’s too late to prevent an encounter.

So that why trail cameras play an important role in helping researchers better understand bear behaviors; for example, one study found that bears can actually determine if a person has food stored outside their house without even seeing them inside!