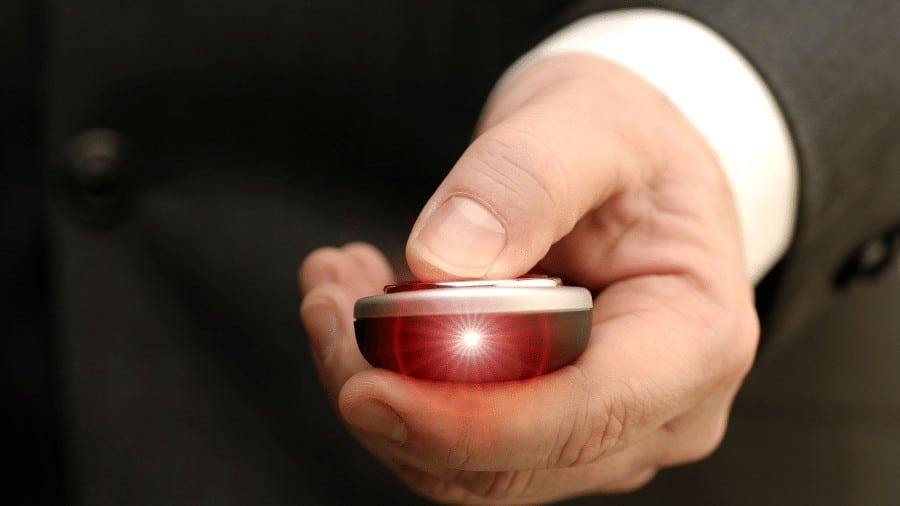 Laser pointers or laser pens; as they are often called by most people, are small portable devices with batteries that emit pinpoint low-power light beams used to highlight something. In recent times, lasers have gained increased usage across various areas but mostly, pointing, which is camera related. It’s this particular reason that beckons the question; can a trail camera be disabled with a laser pointer?

You can disable a trail camera with a laser pointer. The task is however incredibly difficult because you would have to be at a close distance to the camera before the pinpoint feature of a laser pen or pointer can then be directed at the camera lens which renders it temporarily blind.

There are so many varieties of laser pointers available today and they come in different colors like; green, red, blue, purple, and yellow with each having different capabilities and specifications. In the course of this article, we’ll be showing you in full, the laser pointer and its relation to the trail camera based on some of the most popularly asked questions about them. Let’s delve in!

Can you disable a trail camera with a laser pointer?

Trail cameras are special types of security cameras that operate remotely and discretely, however, they can be disabled by a laser pointer. Lasers are beams of light that produce heat. When a laser makes a long contact with materials or objects that are quite sensitive, such as the sensor of a camera, it most times, results in physical damages to the camera. This is why using a laser pointer to disable a trail camera is a difficult task because lasers don’t really have enough power to easily disarm the sensors. To successfully do this, one would have to pinpoint the laser on the sensor head-on, from about 17 feet away from it.

Lasers create dead pixels, they can put horizontal or vertical lines on images and in some extreme cases, the camera sensor could melt. This is because of the burning ability of the laser used.

Can you disable a security camera with a laser pointer?

It is difficult, way difficult, to damage a security camera with a laser pointer than most people may think – though, it’s not impossible. If you were to get a blue laser pointer that has around 1,000 mW and pinpoint it directly at a security camera from a reasonable distance, then you would most certainly affect the camera. But you would however need to go closer and hold the laser steady for a few minutes to do any damage.

We would however never advocate damaging other people’s security cameras. If anyone sets up security cameras around your property or private space, you should involve the police.

How to disable a trail camera with a laser

Ordinarily, these cameras are meant to detect and capture intruders then notify the owners. There are choices to consider when disabling a trail camera with a laser pointer like, is the aim to disable it permanently or temporarily? As discussed earlier in this article, laser pointers vary in capabilities and specifications.

An ordinary keyring laser pointer has a power output of about 1-5 milliwatts. That’s enough to see the dot on a projector screen, and to confuse the auto exposure system of the camera, but not enough to damage your eye, at least not permanently if you don’t stare into the beam directly. When this category of a laser pointer is used on a trail camera, its vision is hampered temporarily until the laser beam isn’t shining into its lens anymore.

There are high-powered laser pointers in the green category of about 100 mW or more. The use of these types of laser pointers is usually closely monitored in many areas, however, because they look like ordinary pointers or even flashlights, they often go unnoticed and have become more popular. These sets of laser pointers are capable of doing permanent damage to the images captured by a trail camera. They shine so bright and can create dead pixels and put vertical and horizontal lines on images. But to achieve this, one would have to hold the laser close to the trail camera for a reasonable length of time before the damage can be done otherwise, you’ll be only temporarily blinding it.

Also in cases where you have a laser pointer of 100 mW or above but not greater than 1,000 mW, follow the same procedure above but with an increased distance of about 2m or more. Should the distance be lesser than 2m or equal to the one above, it would mean the camera lens would damage much quicker while also damaging the images produced by the camera.

Lastly, in cases where you have a high power laser pointer up to 30,000 mW. Pointing the beam directly at the camera from about 10m away for a while would result in damaging the camera lens & pictures produced. Also, should you go closer, chances are high that the camera would begin to melt in a short while resulting in permanent damage.

Can you ruin a trail camera with a laser?

While typical presentation laser pointers are rated as Class 1 or 2, most laser pointers with visible beams are listed under Class 3R or 3B. Class 3B lasers can generate enough heat to potentially damage a security camera, mostly after prolonged exposure.

MTS Intelligent Security Solutions are of the opinion that the three major parts of a security camera which lasers can affect are:

As we’ve often emphasized in the course of this article, it is certainly possible to permanently ruin a trail camera with a laser pointer. However, it is extremely difficult to because:

Below are ways or means laser pointers can ruin a trail camera:

It is important to note that aiming a high-powered laser at a trail camera for several minutes will certainly disable it and could permanently damage the lens or housing.